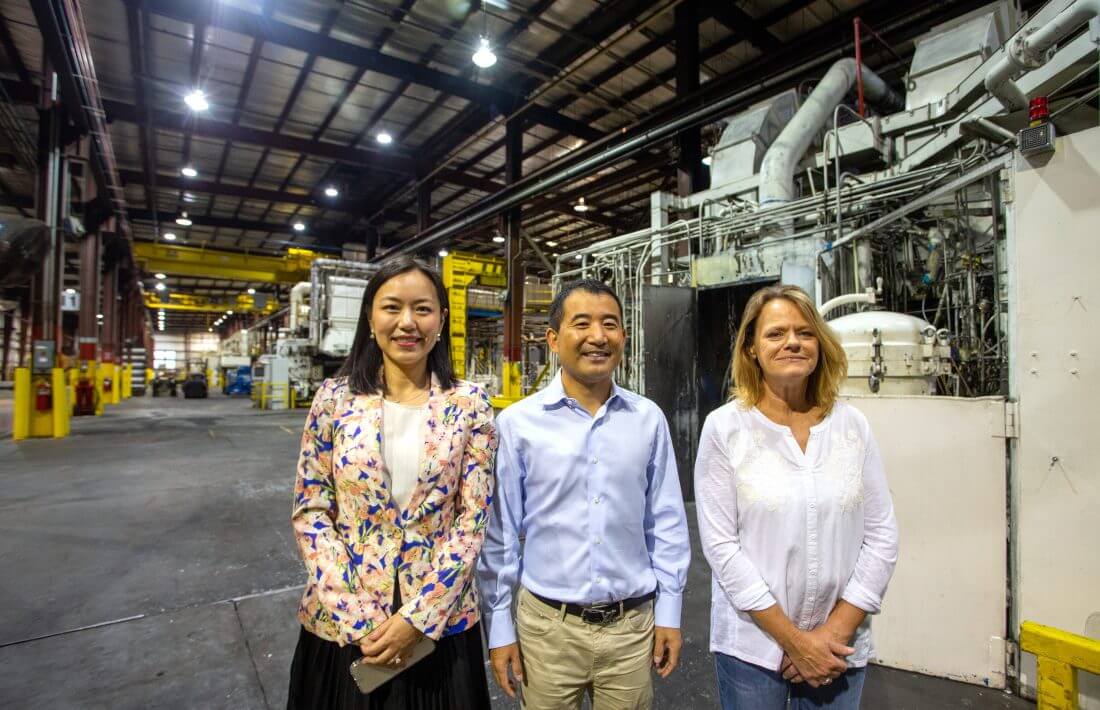 A Florida-based aluminum distributor has bought a dormant metal rolling plant on Trenton Avenue in Williamsport.

Its owners say they plan to put at least 100 employees to work in the company’s first U.S.-based manufacturing operations, many of these higher-paying jobs in a facility that will operate seven days a week, 24 hours per day.

AA Metals Inc., with headquarters in Orlando, recently acquired the former JW Aluminum plant that closed operations in January due to the shut down in supply needs because of the COVID-19 pandemic, said Dr. Jack Cheng, CEO and president of AA Metals.

The new business will operate under the name Chance Aluminum Corp.

The company is one of North America’s largest master distributors of aluminum and stainless products. The city plant owner expects to start operations as early as October. “Having our own domestic mill has always been part of our vision to be the best and most dependable master distributor in North America and aligns with our sustainable growth strategy,” Cheng said.

“With the new addition of Chance Aluminum, we will increase product capacity, expand market reach, and diversify our operations,” he said.

Chance Aluminum will focus on production as the reliable domestic supplier of AA Metals.

For the next 12 months the company plans to recruit and hire 100 employees from the city and region, to generate over $100 million revenue next year.

“We will continue to expand and upgrade this plant to make it a state-of-art efficient aluminum rolling mill, which will provide more jobs, generate more tax revenue, and bring more positive impacts to the city of Williamsport and local communities,” Cheng said.

The plant will manufacture foil and coil, Mayes said. The foil is similar to what one might see on the top of the yogurt lid, beverages, drink pouches and liners. It also is used in the aerospace industry. The coil is the type used in building and construction trades.

Mayes said there will be an assertive rehiring and job recruiting effort. The recruitment will reach out to workers who live in several counties.

They anticipated not reopening until October in order to get a team working on the machinery, ordering and bringing in the equipment and parts, oil and lubricants and preparing the rows of machinery in the main production area, Mayes said.

The overall plan is to reopen and diversify utilizing the existing 240,000 square feet of the entire plant and adding on as time goes on.

The economic impact of reopening the dormant mill was not missed by Lycoming County and city of Williamsport officials.

“We are very happy to hear that AA Metals has purchased the former JW Aluminum plant in Williamsport that closed earlier this year,” said Scott Metzger, county commissioner and chairman of the board of commissioners.

“Dr. Cheng and his team have the vision and goals that have led to his company being one of America’s largest distributors in the aluminum industry.He will bring back the prior workforce and looks to expand. On behalf of the Lycoming County Commissioners we welcome Jack and his team to our community. We wish him great success and are honored that he chose Willamsport as their first U.S. based manufacturing location,” Metzger said.

Mayor Derek Slaughter said the reopening was another example of the ongoing reinvestment of business and industry that will improve conditions in the city.

“I am very pleased to learn about the purchase of JW Aluminum,” he said. “This acquisition will keep a company here in Williamsport while maintaining valuable jobs in our community.”

“I look forward to working with the new ownership team to support the growth and expansion of their investment here in Williamsport and to make the transition smooth and successful,” Slaughter said.

“We are excited to work with Jack and his team to bring back operations to the former JW plant,” Fink said.

“He (Dr. Cheng) has the drive and vision to grow production here in Williamsport which will be beyond what had been produced there previously,” Fink said. “Chance Aluminum will not only bring back the prior workforce, but will also see an increase in jobs over the coming years as Jack’s team implements his manufacturing plans. We welcome Jack to the community and look forward to him in seeing through his vision.”

The city is host to training and educational opportunities provided by Pennsylvania College of Technology, and other schools. The mill will pay living and sustainable wages, Fink said.

Cheng said he planned innovative technology investment and will explore using existing green space on the property for a smelting process.

The company is a global leading master distributor having expanded its operations to Colombia, Turkey and China with over 300 employees and over 800,000 square footage of manufacturing and distribution facilities.